The tiredness that you have felt is etched out on your face by way of an eye twitching. An eye twitch that has slowly started to descend, taking with it your cheekbone and mouth. Face moving like a Mexican wave with no rhyme or reason as to when the next episode is going to take flight.

As Saturday grows older and day merges into night, the twitching gathers pace. You know you should take yourself to bed earlier. Try and claw back some sleep that you gave away to joy, to fun, to laughter to dancing in fields, farms and on Greek mountains.

It’s not so easy trying to sleep when you’ve committed yourself to a writing competition. So you stay up, mind thinks, eyes twitch, clock ticks until the hours reach the AM and you give up the fight and aim to sleep in a little bit later.

Arousing from the sleep, comfortable in your cocoon, you stretch your body, arms and legs long as far as they’ll reach and loudly exhale a satisfied breath. The eye twitch has gone – you won against the sleep tiredness, normality can resume.

Or so you think.

Imagine waking up one day but not every part of you wakes up. No matter how much you force it, you just can’t move your face.

This was my predicament last Sunday morning. The eye twitch had gone, replaced by limited movement on the right hand side of my face. The side of the face that was overly active the day before was now stiff. Paralysed.

Although I was feeling reasonably calm, funny what a good night’s sleep can do. My first thought drifted to stroke. I picked up my phone and went to 111 Online using the NHS App. Now was the time that I could try out the digital technology that I had been promoting for so long at work.

I read the tell-tale signs of a stroke whilst stood in front of my full length mirror – watching my face closely:

A sigh of relief as stroke was no longer a contender. Just a tad relieved as I still couldn’t close my right eye on it’s own or give a full smile.

NHS 111 Online weren’t too worried about my symptoms as I was instructed to see my GP within 3 days. I took to my GPs website and submitted an Online Consultation (another digital technology application that I work with). That done I was back to the mirror trying to move my face into positions I did so simply mere hours before.

I was in a weird state of calm but confused. My face felt tender to touch so I took some Ibuprofen and sat staring at my face. Sometimes with pity in my eyes and sometimes with terror. All the while thinking what the fuck is happening and why is this happening to me?

I trust and believe in the NHS and the technology I promote so was comforted that I didn’t have anything serious. I allowed myself to mope a tad more before my mind focused back to the writing competition and the looming deadline.

I awoke with a nervous energy like a kid on Christmas morning, full of expectations. Not for presents but for a fully moveable face. Santa hadn’t been to visit me. Instead my face continued to hold.

I felt pleased as punch when a call at 9am was from my doctor’s surgery and I was booked in for an appointment 2.5hrs later. Yes – go on digital technology – it does work. Patients will use it!

I’m sat in front of the Clinician walking her through the journey I had from eye twitch to face twitch to no twitch. God how I missed the twitch. She confirmed that I had Bell’s Palsy and explained it to me.

Bell’s palsy is temporary weakness or lack of movement affecting one side of the face. Most people get better within 9 months.

One of the symptoms can be eye irritation, dry eyes or tears. I can confirm that on hearing the diagnosis the tears that glazed over, stinging my eyes, were not due to the condition. I was sad as fuck. The realisation that my face could be temporarily fixed this way for the same amount of time that a woman grows a baby was depressing.

“9 months.” I said looking up trying to catch my tears. “That’s some time. What’s the average time for most people?”

She kindly smiled at me. I took hold of her empathy and sat in hope.

“And the quickest” I pleaded, wanting to walk away with something to work towards.

My impending birthday. Numerous meetings with public speaking slots on the agenda. Summer. A date on Wednesday. All bounced to the front of my mind.

“We can’t point out for sure how you got Bell’s Palsy. It can be linked to getting an infection, or a virus if your immune system is down. It can be brought on by stress.”

I was given a 10 day prescription of steroids and told to buy some eye drops. Her parting words were you have it really mild, it’s not that obvious.

As I walked back home trying not to slip into ‘woe is me’. The first person I contacted was my Auntie Sarah and she helped me come to terms with the situation. Letting me lead and explain my story, giving me space to moan and grumble. She gave me just the right amount of sympathy before bringing on the light heartedness and making me see the funny side of things. I love her for this – for how she can always bring the light and the laughter. This has made me realise that no matter how close your friends are, family are the one! They’re the ones that will pick up the pieces, if it had been something more serious the door would have opened and she would have been there with more than kind words. My heart aches with gratitude as I think of her.

A text from my friend later that day led to an acupuncture session. I nearly wasn’t going to tell her that I had Bell’s Palsy – I was still in the ‘coming to terms’ with it phase but I not only told her I had it, I asked if acupuncture would help. Fast forward a few hours and I’m laying on a treatment bed in her house. Needles stuck into my feet, hands and the affected side of my face, my friend talked me through each of her actions. I felt comforted that she had seen and treated people with Bell’s Palsy before – I knew with her I was in good hands.

I had told my friend that although the cause of my Bell’s Palsy can’t be confirmed I believed that it was definitely due to stress. I had been so busy of late and not slowing down even though my body and mind ached and begged for it. I felt confident enough to tell her that I had dived into my Louise Hay ‘You Can Heal Your Life’ book and looked up my condition. I received the biggest wake up call slap in the chops shock as I read:

Probable Cause: ‘Extreme control over anger’ and ‘Unwillingness to express feelings’

Yup and Yup. That was me all over. Always trying to withhold my thought and feelings for fear of: confrontation, being criticised, upsetting the other person – the list goes on.

I blamed myself. I had brought this on. It reminded me of a quote I had recently seen. “If you don’t look after your wellness you’ll have to look after your illness”. That was my current situation.

I left my friend’s with a Moxa herb which I was told to burn and place close to my face for 5-10 minutes a day. The herb would help to heal my face. I have been doing this daily alongside chanting the new thought pattern affirmations from the book:

Window open, herb blazing, looking like a witch that has stolen a smoke from Cheech and Chong (yes, showing my age here) I go through the process each day. I don’t care which of my neighbours, of which I have many, can see me. I aim to be healed as quickly as possible.

On Thursday instead of having lunch at my desk in-between phone calls and emails I took myself out for a walk. My eyes were aching in the unnatural light of the office and from constantly staring at the screen. It was time to start looking after myself at work. I happened upon a crystal shop and was drawn into it. I asked if they could recommend a crystal that could help to heal my face. I loved that a thorough conversation took place as the husband and wife team ran through some crystals before offering up ‘Rose Quartz’ – to help with my confidence and self-esteem as my face wasn’t as bad as I felt it was. Or Malachite – a beautiful green crystal to be worn close to my heart. I opted for the latter as I had some rose quartz already by my bedside. I believe in the power of crystals and as I aimed to aid on my healing I bought the stone, asked for it to be made into a necklace and wore it with faith. Plus, it’s really pretty. 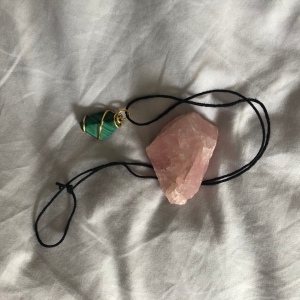 All statements I’ve heard from the few people that know already that I have Bell’s Palsy. Although grateful for their kind worse and honesty – it doesn’t make me feel that much better. I can see it. I can feel it. I don’t blame them – I would have been saying the same if it was my friend in front of me with the condition.

But it’s not my friend in the mirror. It’s me. It’s me with a face that’s not quite right. A face where once was a bright beautiful smile (not even gonna play it down – my smile was my passport) is a strained smirk. A mouth that can barely drink from a bottle without spilling. Lips that struggle to say certain words. An eye that can’t blink and lets itself be constantly known with dryness or tears and tingles. A forehead that doesn’t wrinkle at one side. An eyebrow that remains motionless. A cheek that can’t convey happiness. That is who I see. That is who I am for now.

I am giving a half smile to my Bell’s Palsy due to the lessons I’m learning about it.

Who knows how long my face will be shaped this way. When the time is right my face will morph back into the Emma I know and will love that little bit more. Until then I’m trying to master my resting bitch face and have been telling people that it looks like I’ve purchased a face lift with a Groupon and misunderstood the 50% off!

p.s. Have you or someone you know had Bell’s Palsy? If so, drop a message in the comments to tell me your story. I’d love to read it.

8 thoughts on “Giving half a smile to Bell’s Palsy!”