Grab yourself a cuppa, get yourself comfy – this post is about a 7 minute read.

Most days when I arrive back to my apartment, I have a huge grin on my face. It’s got the wow factor – especially the sweet view of the River Lea. When the sun is out, the water glistens and comes alive. Barge boats, renovated into floating homes, moor up or move on – saluting each other as they pass. Adventurers in canoes and on paddle boats glide effortlessly by mating swans and paddling ducks. Joggers, dog walkers and cyclists mimic the activity on the path that runs alongside the river. I sit on the balcony or at the table, pausing – taking it all in. I watch them knowing they’re oblivious to me, peering into a snapshot of their world. 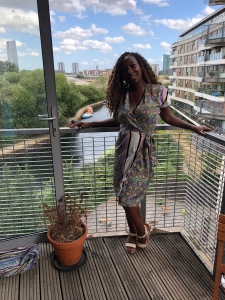 Last Friday evening as I stretched out on the sofa, releasing the tensions from the working day, my usual grin was replaced by pursed lips. A reaction formed by the countless cogs going off in all directions in my mind.

“I love this place but the job I’m doing now I’d never be able to buy it. Damn, I don’t think there’s anywhere in London I could afford to buy if I continued in the same job. Let’s be honest, I couldn’t afford to buy anywhere right now due to the life of excess I’ve previously lived. But I’m comfortable and living a good life – why should I complain? There are so many people who are in dire situations. I have a roof over my head, food in the cupboard (due to a rare spot of adulting and getting an Ocado shop with the basics) and a regular income. I’m living life well – aren’t I?”.

Why the turn around? I read a book and my god did it fuck with my emotions, turn them inside out whilst slapping me in the face and giving me lesson after lesson. For such a small book it packed a powerful and at times painful sucker punch.

The book I’m referring to is ‘Dumbing Us Down’ by John Taylor Gatto. The first paragraph of the blurb reads:

‘After over 100 years of mandatory schooling in the U.S., literacy rates have dropped, families are fragmented, learning “disabilities” are skyrocketing and children and youth are increasingly disaffected. Thirty years of teaching in the public school system led John Taylor Gatto to the sad conclusion that compulsory governmental schooling is to blame’

I had never heard of the title nor the author and wasn’t looking for answers on this particular subject and have never been one to delve too deeply into conspiracy theories. I actually thought I would be donning my Devil’s Advocate cape as ‘Why wouldn’t you want to send your children to school?’. The most I thought I’d get from it was an insight into the education system and why it’s harmful to the youth of today.

Little did I realise that I would be taken on a journey that reaches as far back as the 19th century and the industrial revolution. Meaning that myself, my peers and millions before me have also been affected by the ‘system’.

4 pages in, eyes devouring every word, brain going over time ‘Schools are a huge profit for the economy in so many ways’ – I muttered to myself as I threw the cape off! Visions of soulless buildings filled with furnishings and equipment paraded through my mind. Uniforms that create divide and cause anxiety. Churning out armies of pupils year after year forcing them into one way of thinking.

Gatto likens schools to prisons, with bells going off at set times, marching you through from one class to another, your every move watched – with limited space for individuality or creativity.

Speaking of creativity. Half way through reading the book, whilst on a course at work, we are made to watch a video. It’s here I am introduced to ‘Sir Ken Robinson’ and his Ted Talk ‘Do Schools Kill Creativity’ – which is one of the most watched Ted Talks of all time. I’m not a stranger to Ted.com but was new to Robinson. A divine timing and an extra portion of ‘what the fuck’ added to my plate.

Ken also mentions how schools were born out of the industrial revolution and the need to create hordes of workers that wouldn’t question the system – they ‘educate people out of creativity’.

I’m pulled back to my school days – the uninspired teachers, the constant grading and judging, the class ‘sets’ (I was in Set 2 for all but French – yes, I remember) of which you were almost certain to stay. The anxiety that clung to me when I walked through the school gates – my fear of public speaking – not wanting to make mistakes. I didn’t realise it until much later on in life that it was school that I didn’t like and not learning. I bloody love learning as I’m sure many of you regular readers will know.

Seeing things from another perspective made me feel like I’d been duped, pulled back and moulded to fit into the world. Conditioned to think of the ‘rat race’ as the only race available to me. As time has advanced it is not only the education system that has helped to keep us in check.

Gatto, who was a teacher, provides a breakdown of how the children he taught typical spent their 168 hours a week. I was so shocked by the allotted time for each of the activities which only left 9 hours per week for private time!

9 hours a week doesn’t leave much time to get to know yourself – thoughts, likes, dislikes or nurture your talents. Nor does it leave time for creativity. And this book was written 25 years ago – so the equation doesn’t include the internet which we know robs so many people of time.

I am so guilty of letting my time pass by in a blur of mindless scrolling. Staying up late on Facebook and Instagram – begging to be entertained, all the while subconsciously feeding off the adverts that whisper: ‘you can be happy when, you need this, you can have this, you should look like this, buy this…..at the press of a button you could have it tomorrow’.

I feel the anxiety surging through me as I scroll but I don’t turn away – I tell myself that I’m too tired to read a book or write. I’m invisibly trapped, torturing myself for still being up as the clock advances closer to my wakeup call, yet I sit and scroll – is it a cry for help or am I simply part of the system?

There were so many times in the book when I felt defensive – wanting to protect myself from statements that stung like paper cuts which continued through to the last chapter ‘Against School’. This chapter had me admitting that I’ve been conditioned and am more of a sheep than I realised.

I was growing old but not really growing up. Not in a Peter Pan, keeping my innocence kind of way. Instead I had traded my maturity for an easy life. Becoming a willing consumer to gadgets, feasting on mind numbing entertainment to feed my boredom, acting independently without owning my independence.

I so desperately wanted to hold onto what I believed I was in control of. Like most people I don’t like to be wrong and often find myself feigning ignorance or sticking with my original opinion, similar to that of a child who stubbornly refuses to go to sleep even though they’re tired. I agreed with parents who proclaimed that we need to ‘keep children as children’. I now see this from another perspective. Could that protective shield also be acting as a barrier in which to dumb them down?

Before I read this book, I thought I was an advocate for schools but now I realise that I’m an advocate for education. Trying to imagine how schools can be different and relevant for the needs of today and the future is hard because change is hard and trying to conjure up visions of the not yet created – even harder. Even though long before institutional education, people learnt, created, built and achieved.

I don’t know the answer, but I do know that the current system is not working.

I believe that for humans to prosper – something has to change! We need prevention as well as the cure.

Through reading the book and writing this blog post, my mind has wandered off on so many tangents, all linked and relevant. It led me to purchasing a couple more books which will give me a deeper insight into this topic: ‘Common Sense’ by Thomas Paine (Gatto referenced it in one of the chapters) and ‘Educated’ by Tara Westover (a Stylist magazine recommended read and apparently highly rated by Barack Obama). 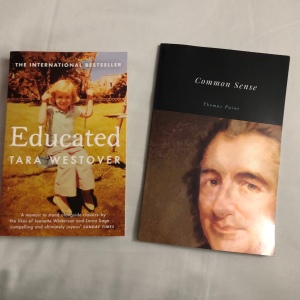 My aims are to: 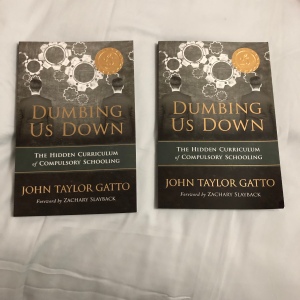 All this extra time I’m saving from the short cuts in life – is it well spent? Granted yes – I do read a lot. When reading, although it gives me new thoughts and allows me to see things from another perspective, I’m not creating. I spend a lot of this time on social media – when it’s good it’s good but when it’s bad, it really affects me. Which means I’m saving time so I can increase my anxiety, feel down, ugly, broke, envious, annoyed and countless other feelings.

This evening. A week after I started writing this post. I entered my apartment with a smile on my face. Not because I’ve broken up for Christmas – I’m working throughout. No – I realised that what I love most about the apartment is the activity that occurs directly……outside. Life! Yes, it still is a sweet pad and I will continue to be grateful for what I have but I’ll try to continuously reset myself when I feel my attachment to it and consumerism as a whole. Plus, the apartment won’t matter if the world outside my window is decaying.

Tomorrow as I sit and have my breakfast at the dining table. I know that when I peer into the snapshot of the people outside, I’ll be wondering “What do they think about schooling, education and do they feel like they’re being dumbed down too?”

p.s. don’t forget I have 2 copies of the book to pass on.

7 thoughts on “Lessons and Lightbulbs from Dumbing us Down!”