Note: The subject urging people to read on was aimed at those that have not been affected by rape.

The title of the event read: ‘Many Kinds of Rape: No Blurred Lines‘ – I glossed over it, not fully being able to hide the unease that began to settle in my stomach.

I felt uneasy. I didn’t want to purposely put myself into a situation where I would feel uncomfortable and upset.

Rape is a taboo subject and the thought of being in a room listening to women talking about their experiences isn’t something that I’ve ever added to any bucket list I’ve written.

Follow your feelings people often say. Well my feelings wanted me to delete the email and erase that word from my mind. Put on some music or watch something funny. Hide the pain by numbing!

A small voice from deep within whispered….

So I registered and then I numbed!

The event was put on by the wonderful team at Scarlet Ladies and held at a fantastic café in Fitzrovia, Coffee, Cakes and Kisses.

Just like the #ITalkSex event – which I wrote about in an earlier blog (here), I left my expectations at the door. My fear and nerves decided to stick with me for a while longer.

And talk about it the ladies did. Their strength and vulnerability allowing us into their worlds. Sharing the space with the silence, as experiences were retold, were heavy sighs laced with empathy and disgust. Gasps of shock and anger. Sniffles of sadness. Warm hums of agreement. And although you couldn’t hear it , there was love, and it flowed through the room – making everything that little bit lighter.

As the event came to a close, the courageous women that sat before and besides me, had etched their stories onto my heart. I felt empowered and optimistic as did the many women in the room that I spoke to afterwards.

A week later. In another part of London. I sat at the back of a sold out event as some more inspirational women hosted an event – ‘The Art of Consent‘ 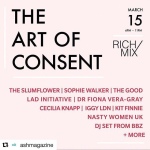 As the lights dimmed, the friendly Thursday night chatter quietened to make way for a screening of documentary, ‘100 Women I know‘. Four young women, survivors of rape, recounted their stories.

As the credits rolled applause filled the room and once again I was grateful to be surrounded by change makers.

I hadn’t even known what to expect – having only purchased my ticket to support my friend, who had co-organised the event. Sidenote: My friend is the Founder of Ash Magazine and is currently crowdfunding – please take a moment to check it out – it’s such a worthy cause.

The evening continued with a Question and Answer session with the director of the documentary, Phoebe Montague, and the women who were filmed. Followed by a panel of women and men discussing ‘How to create a culture of consent’. 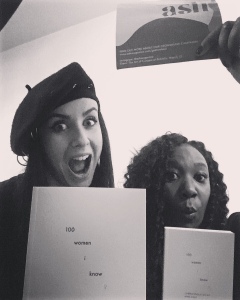 Some of my takeaway moments that I would like to share  (I know that men also get raped but as the events just featured women’s stories that’s why only women are mentioned):

A line that stuck with me from the Art of Consent night came from one of the rape survivors. She said that when a guy that she knew found out he had raped someone he was mortified! How many other guys don’t actually know they crossed the consent boundary?

So I invite you to talk about rape. About consent. About respect. To help shift beliefs and opinions – as conversations can lead to change.

p.s. If you’ve liked this or any of my other posts, I would be grateful if you could give them a share.

Special thanks to the people leading the way. I highly recommend you check out each of the links to find out more….

3 thoughts on “Let’s talk about rape! If that word made you feel uncomfortable – I invite you to read on…..”