Skip to content
Date: May 31, 2017Author: This Vulnerable Life 16 Comments

It’s taken control of me. My mind. My habitual functions. The slip of my hand mindlessly reaching for my phone. A scroll. A like. A glance. A smile. A sigh.

No notifications. Is the phone needing to update? Is the site on a go slow?

Notifications. Beam. Oh, I have no interest in them.
Or
Ooh….. that’s interesting. You have my attention. For a moment…….

I love Facebook. I love the ways it has improved my life. How it’s easy to connect. To find my tribe. To have a voice. To live another part of me. The part that’s not as introverted.

I’m always found on the defensive side when people try and blame Facebook for what is wrong with the world today. Like a caring big sister who can hate on her sibling but woe betide anyone else who tries to!

Knowing deep inside that my defensiveness comes from agreeing with some of the opinions that are aired. I once downloaded an app which tracked where you were spending most of your time on your phone. After the 2nd day – my defensive reaction was to delete the app! Well of course I’m on it all the time. I need it for work! Ahem……

When I first heard about Facebook I was in a relationship with a guy that thought it was a “load of tripe” or words to that effect. As soon as we broke up I didn’t run into the arms of another guy – ready to rock the rebound. No – I joined Facebook.

I believe that’s one of the things that helped get me through a challenging breakup. Facebook was the distraction I needed during the day whilst my super strong sleeping pills took care of the night. (Which I had to use sparingly as the doctor said that one prescription was my lot).

I connected with old friends and started to live an adventurous life. I was opening my eyes to a world outside of Leeds. I started to see what was possible. The places I could go. The things that I could be. I didn’t just see them. I did them.

So actually admitting I have a problem is tough!

It doesn’t help that I’m a procrastinator. Facebook is like catnip to me. Always wanting that extra hit. To find out what’s going on. It’s not all positive though. I unleash the Comparison Cashier and start passive aggressive arguments in my head at something someone has said. Their views. Their opinions. Pitching up camp in my mind.

Too much Facebook and I’m tired and feel guilty. A tad empty inside. In my previous post Partying with Guilt and Fear! I mentioned that I often feel lazy. To which, the feedback I received from a few friends that know me. “Lazy is the last word I would use to describe you”.

And I get why they said that. I’ve lost count of the times I’ve been called ‘busy’ and was even embarrassed with the word at one point. I agree, I don’t appear to be lazy as I’m always ‘doing something’. They don’t see the other side though. The time wasted – doing absolutely nothing but aimlessly scrolling until numb. When I have:

I actually started to write this post yesterday at 11.50pm! I said I would be in bed by 11pm. I always lie to myself when it comes to bed times. I get caught up with something that needs to be done/viewed/researched – immediately! Normally on Facebook.

So after almost 10yrs of using Facebook as a crutch. I’ve admitted that a break is called for. Not a long break but a break nonetheless.

I’d decided this some weeks ago but after finishing ‘The Circle’ by Dave Eggers on Monday evening, it was the extra push I needed. It’s a dystopian novel about how technology and social media is taking over our lives. 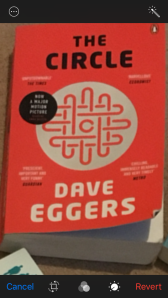 The book itself was a simple read and kept me engaged. Plus, I could actually see how this could be a reality. People, myself included – I’m up near the front of the queue – are continuously doling out sections of their lives for technology/others to control. Maybe:

And that’s when it struck me!

Although I’ve been single for 10yrs. I ran head first into a different type of relationship. I’d been screwing Facebook!

Maybe I thought without Facebook I would be lonely, bored and……..vulnerable?

Not even half way through the book and I knew that I was going to take a break from Facebook. I decided a weekend would be enough. Then increased it to a week and just now I have further increased it to 3 weeks!

To many this isn’t a big deal. But to me – I see my oxygen reserve slipping away. In addition to connecting with friends and stalking. Come on – we all do it! I’ve used Facebook for networking, business and learning. It’s a HUGE part of my life! That statement itself hit a nerve. It’s really quite sad.

A lot can happen in 3 weeks. So I’m excited to see what my creative mind has in store for me. Will letting go of Facebook present a new, tangible love? Will I read more books? Sleep better? Be happier?

It is widely said that it takes 21 days to break/make a habit. So I therefore announce that from 5th-25th June (inclusive) – I will deactivate my Facebook. The messenger will still be on as a way of contact but that is all.

I would love to hear your thoughts on Facebook and social media in general. How attached are you?

I will still be updating my blog – you’ll be able to see new posts via my Twitter and Instagram.

Here’s to me taking control of my life.