Skip to content
Date: May 6, 2017Author: This Vulnerable Life 0 Comments

After the heaviness of my last post I had made the decision to err on the light side. I had a post in my head all ready to be transformed into something that whilst still being vulnerable didn’t mean I needed tissues to accompany me.

That all changed when I decided to spend Bank Holiday Monday unpacking some boxes that had arrived from Leeds late last week. Boxes that had been stored patiently at my friend’s house since I moved to London.

As I hadn’t touched the items or missed them for over a year it was easy to rummage through and throw a lot of the once prized possessions away. I came across a newspaper and was puzzled as to why I was saving that – until I saw my friend’s face emblazoned across the front. A friend that is no longer on this earth. And I was struck. Paralysed. In shock. Upset at myself for having to question what the paper was, whilst reliving the sadness I first felt when I found out he’d passed.

No sooner had I recomposed myself that another memory of a lost soul entered my path via the form of a photograph. An old school friend. Then another and another and unfortunately another. I clearly should have marked this bag, so that I wouldn’t be confronted without warning of all the lives that had in some way touched my heart and left in it fragments of memories. Pieces of them!

I actually broke down. I was performing an ugly loud shaking cry. Knelt on my bedroom floor, surrounded by funeral programmes and old photographs, nestled in with boxes of my past.

I let myself cry – I was home, alone and had no makeup on. That choking motion that occurs when forcing back the tears, gasping for breath wasn’t going to take place today. After a while, probably minutes – although my body was so drained it felt like longer. I continued searching through my stuff and my tears turned into laughter as I read an old school report.

I noted with interest just how quickly my emotions were able to switch from sadness to laughter. From wanting to make the most out of my life and not waste a spare moment to stopping, reminiscing and procrastinating. What I’d done in a matter of moments is what I realised I’ve done over and over again in my life. This is best explained by a note I wrote in my diary aged 15.

“My mother died in February – it was so sudden – not a lot of people know about it – I can’t bring myself round to tell them. All the family are coping as best they can. My whole life was turned upside down. She was so healthy one day, the next she had died. We have to look to the future now – and since my mother’s death she has made me realise that I should have fun now – as I’m only young once. I don’t care what people think about me no more – it’s my life and I will live it the way I want to live”

And I did! Well……..for a few months until I started listening to the world telling me to live ‘normal’ and I started caring what people thought of me. I took 2 steps closer to living the life I wanted – and as the dust settled – 1 step back. This pattern continued with every tragedy – 2 steps closer – 1 step back.

Still I wasn’t going to write about this – about death and my vulnerability surrounding it.

But then it occurred to me that it would have been my Dad’s birthday today (Sunday 7th May) – and instantly I realised that this is what I was meant to write.

I have been to more funerals than I have weddings – the majority of them for people my age or younger. I’m 35 and have lost both my {foster} parents and yet I’m still vulnerable as fuck about death and dying! I see it and fear it most days.

In most cases, the more that you experience something the easier it becomes when faced with it the next time. Not with death. That shit hurts and there is no stopping the pain.

I continuously ache for all my friends that still have their parents or haven’t lost someone of significance. I step into their pain and I prematurely feel it for them. I walk past old people and it hurts and all I can think of is when are they going to take their last breath. Do they have someone to take care of them? My mind scans statistics and I wonder who’s funeral I’m going to be crying at next. Absolutely morbid! And such a tiring and strange way to be.

In addition to this, my fear has also had a personal effect on my life. I tend to put up barriers so people can’t fully get close to me. As the closer someone is the more it will hurt if I lose them. So what I’m actually doing is hurting myself – constantly – in anticipation of loss. I hold back love for fear of losing that love. Not a healthy way to be and as it’s my year of vulnerability and I want to make a shift in my life. I realise this habit I’ve acquired has to stop! It helps that I’m now actually aware of how I’ve being sabotaging parts of my life.

The worrying isn’t helpful as when the situation arises there is only one thing you can do and that is deal with it. Coping mechanisms come to the fore, adjustments to life are made and somehow you soldier on.

So now I’ve made it known that I have an issue with death I am on a quest to not let it run my thoughts and my life.

I started with a visit to Ted.com. There I watched and listened intently to 3 talks about death. Taking nuggets of wisdom from each video, the one that shined brightest was by Stephen Cave ‘The 4 stories we tell ourselves about death’. His closing words were like a warm hug – giving an alternative perspective.

“Now, I find it helps to see life as being like a book: Just as a book is bounded by its covers, by beginning and end, so our lives are bounded by birth and death, and even though a book is limited by beginning and end, it can encompass distant landscapes,exotic figures, fantastic adventures. And even though a book is limited by beginning and end, the characters within it know no horizons. They only know the moments that make up their story, even when the book is closed. And so the characters of a book are not afraid of reaching the last page. Long John Silver is not afraid of you finishing your copy of “Treasure Island.” And so it should be with us. Imagine the book of your life, its covers, its beginning and end, and your birth and your death. You can only know the moments in between, the moments that make up your life. It makes no sense for you to fear what is outside of those covers,whether before your birth or after your death. And you needn’t worry how long the book is, or whether it’s a comic strip or an epic. The only thing that matters is that you make it a good story.”

To think of us all as books. Of differing sizes, genres and endings. This made death seem more poetic – easier to digest. Unfortunately, it is something that is going to happen to us all and me spending time thinking about it isn’t going to make the situation any easier when it happens.

So it’s now time to take off my premature sympathy glasses, to uncover my heart and stop living life in the future.

This post is dedicated to my Poppa Bear – Leslie James Thompson. Your book came to an end and with it you have proved that my story still continues. 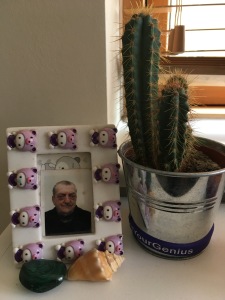