If you could only keep the items of clothes in your wardrobe/drawers that you could list. How many would you be left with?

Another parcel awaited me as I got home from work that evening. I clasped my hands together giving a toothy grin as I ripped into it. The product inside was pants. Literally pants! I added it to the other packages, some that had arrived by post, the rest via big bright gift bags, handed to me in person.

The figure was rising and with it my emotions. My stomach fluttered in time with my dancing feet as I clicked my fingers and bopped my head. ‘People are ace. I’m so fortunate to know so many great people’ I thought as I pranced around my bedroom.

I had finally stepped foot in my own special hell, a shopping centre. I was here to buy last minute essentials for the upcoming volunteering trip ‘last minute’ being the optimum word as it describes me and my life to a tee! Coming straight from work meant I had even more gift bags to hand and this before I had started my own spree. I predicted packing this evening would span into the early hours…..

As I sat on my bedroom floor, looking over the mountain of things that had to be wrapped, rolled, folded and tightly packed – the usual self-criticism on being unorganised was replaced by an overwhelming gratitude.

I enlisted the help of my amazing housemate and we sat cross-legged unpacking the underwear, egging on each others emotions by coo’ing, bottom lips out whilst throwing statements about, such as: “Aww look how tiny these are. Oooh these have Super Mario on them. What about these unicorns….waaah”

Broodiness over. I got to counting. 195 pairs of pants and 24 vests! 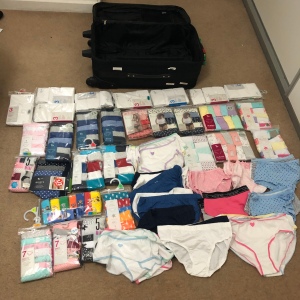 I had arrived at this moment due to a post I wrote on Facebook 3 weeks prior, inviting people to either donate underwear or money (which was to go towards a free shop for families) for my impending trip to Kenya.

I’m a bit of an awkward turtle in situations like these – I struggle to ask for help on the best of occasions. I pushed my anxieties aside as they paled insignificance against the greater cause.

After reading an email from Sally (for those that have arrived new to the Kenya blog series, you can find more about Sally here) that gave ideas on what volunteers could take over as donations should they so wish. I was stopped in my tracks as I read the following line:

“Childrens underwear including vests. Some children may only have one pair of underwear so this would greatly help them.”

I felt the embarrassment bubble up inside me as I thought of my underwear drawer, which had recently come under attack after watching ‘Tidying Up with Marie Kondo’ on Netflix. And yet there were still so much underwear that survived the cull. Work: regular day/meetings day/working from home, going out, period pants, sleeping pants, gym pants, off pink pants (the result of being put in the wash with a red item of clothing) weekend pants, regular bra, t-shirt bra, sports bra, uncomfortable bra, padded bra (that I’ll never wear as I feel too conscious but still want it), bralette…….and I shuddered.

It was that moment I decided that underwear is what I would donate.

Other volunteers were taking advantage of the generous luggage allowance and stuffing their suitcases with shoes, school uniforms, clothes, backpacks, stationery and gifts for the children.

I also decided on raising money for the ‘free shop’ we were going to host (where families from the local community would be invited to come and get food, household supplies and other items for free).

I received an email notification each time a donation was made £5, £20, £15, £50, £10 – the money was flowing in and with it my heart growing. People were still donating whilst I was out there with the final tally exceeding my target by 170%!

I had known the rest of the volunteers less than 24hours and we had already formed a team and set to work sorting out the donations we had brought over. I wasn’t the only one who thought ‘underwear’. Leslie and her friends had also been busy – with her she had over 500 pairs of pants and a decent amount of vests!

I smiled as I realised that I was not the only fortunate one to be surrounded by generous loving friends – the other volunteers were too.  That is how we could spend that Friday afternoon sat outside in the scorching sun, laughing together as we sifted and sorted through the suitcases. Across from us a troop of monkeys swung in the nearby trees – surreal!

All the negative news from the world that had recently been on my radar, evading my mind, stealing my sleep, evaporated. I breathed deeply – I was in a sublime bubble and I warmed to the feeling that the world is actually a beautiful place, save for a few dark corners.

T minus….No more counting – I want to savour the experience!

In each of my posts on this series, I keep coming back to that moment when my eyes first met the pupils and this post is no differerent. Congregated in the courtyard, their red and white uniform bringing them together making them look like a bright, smart, beautiful army. 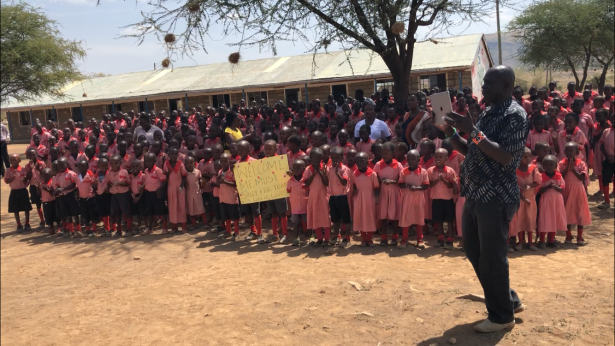 When viewing the children individually and close up, that smart put-together view we were met with soon gave way to reality. Holes in clothing, toes peeking out of shoes. Unfortunately the rough terrain many of the children have to trek to get an education, the constant heat from the sun and the regular sandstorms added with the fact that the uniform they are wearing is most likely the only one they have, made this the norm.

I am again transported to visions of my wardrobe. ‘80% – I think I’d be able to list 80%’ and to the mindless shopping trips I’ve taken, often to fill a void. Shopping……just because!

Handing out the underwear over the week was fun, almost every pupil received two pairs of pants. We even managed to give some underwear to another school and the free shop. I gave 4 pair of pants to the school cook for her child, she returned the thanks by way of a headband, which proceeded to be part of my outfit for the rest of the trip. 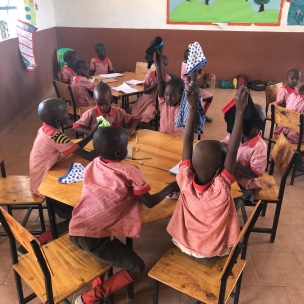 Had I ever grabbed onto an item of clothing with both hands, so happy that it now belonged to me that I wouldn’t let it go?

Sally calculated that the money raised could go much farther than I had ever anticipated. With some additional money put in by the volunteers we would be able to invite 28 families to visit the free shop. Never before had a number given me goosebumps.

Sally passed this message on to one of the teachers who knew the community well and would be aware of which families would be most in need of our services. The women of the community came – on foot, some with babies on their backs ready to carry the heavy load on their front. Each and every one of them had a gift to pass on to us – bracelets, scarves, traditional masai dress, necklaces, earrings – we were all adorned by the time they left.

The last of the invitees to arrive was a young girl who had just lost her father to aids and was extremely close to losing her mother to it too. Not only that but her stepmother and two of her siblings had also been diagnosed with it. No amount of rice, maize, sugar, tea could account for what she was set to lose. All we could do is show her she was in our thoughts and our prayers. The energy from the love in the room when she left was something else entirely.

Whilst the free shop was taking place, new shoes were been handed out to those children most in need in another area. As disheartening as it was to see the shoe pile decrease as the queue of children that required a new pair grew, it was wonderful to see the faces of those that did manage to get fitted with a pair. 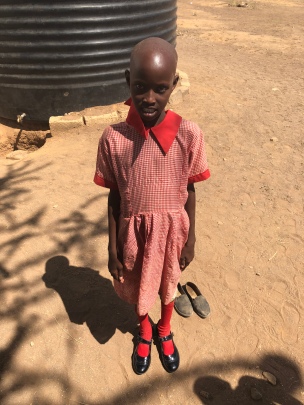 The money that was left from the collection was to be added to Lissa’s Just Giving. Lissa and her friends did an incredible job of raising enough money to purchase over 250 workbooks (at last count).

T minus – time to leave Memusi…(waaah)

“Who here has the longest walk to school” I asked 4 girls who were all in their final year of this school.
All nods go in the direction of one girl.
“How long does it take you to walk?” I quizzed
“Just over 2 hours one way”
I tried to hide my astoundment whilst recalling all those times I moaned in the morning having to walk 20 minutes to the tube stop
“What size shoe are you?” I said, whilst pulling my foot out of my walking trainer
“39”
“Perfect. Try these on and if they fit you, they’re yours. They’re walking shoes so should help make the walk better.”

A version of Cinderella. Granted, it didn’t change her life completely but perhaps made it more bearable. Seeing her face as I handed them to her with some fresh socks (to make up for them being recently worn aka sweaty) will stay with me and hopefully keep me grounded for some time.

My suitcase left Kenya a lot lighter than it came but my head and my heart left heavy and full, with stories of appreciation and lessons on perspective and visions of gratitude over the most simple of things.

Tomorrow it will be 2 weeks since that tearful goodbye at the school and I can honestly say that my eyes have been open to view the world more optimistically. All around me, people are acting with kindness, giving with love no matter how small and simple they feel these acts may be – they amount to huge things – the ripple effect is growing. People are donating their time, money, energy and focus to those that are in need. I see it on my social media, in the streets, amongst strangers and with friends. Thank you all – for your giving.

This blog post is a thank you. A thank you to each and every person who made my time at the Memusi School even more rewarding than I deemed possible by gifting underwear and/or donating cash. I hope I have being able to convey just how grateful I am to each and every one of you and to the volunteers and their friends who also gave with their hearts. Aaah you guys all rock!

p.s. to find out more about the charity, please visit Memusi Foundation

p.p.s. if you like this or any other posts I have made, I’d love you to join the conversation in the comments below or like/share the post.

16 thoughts on “The True Gift of Giving!”

Leave a Reply to This Vulnerable Life Cancel reply